I’ve waited for a while for this new book. David Baldacci one of my all time favourite crime thriller and mystery authors. His latest book is another story using the main character Amos Decker. Amos Decker is one of the characters I love, you can find the info about him here.

Due to a sports injury – Amos has a great ability to retain memories of events and situations that happen throughout his life.  He has also suffered great loss and cannot emphasise with people in the way that he used to.

What is the story about Amos Decker?

I always think that a book that starts well, really hits you in the gut and gets you interested. Too much slow, slow, slowness can drain you before you even begin. For a book to be worthy of the Jack Reacher series it needs to grab you right by the hand and take you into the scene. This latest book by David Baldacci does this, it starts with the lines “Who killed you? Or, who murdered you? There was after all, a distinct difference.

Yes I’m hooked, here we go again, but like a boxer doing the jab, jab then bam, right cross, the book has Knocked you out! 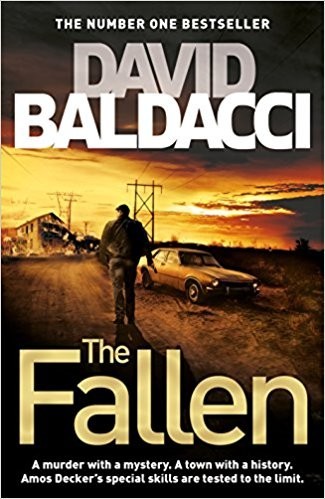 This time Amos is visiting his friend Alex Jamison’s sister in western Pennsylvania which is like a skeleton of its former self due to economic downward spiral. Decker realises that something doesn’t look right in a house opposite so goes on a quick hunt to find out why a light would if flickering.

This sets a murder inquiry off which although Amos and Alex are supposedly on holiday they decide to get involved with the local police.  You are drawn into this weird eery place called Baronville, Pennsylvania.  David Baldacci understands how to create a back drop to the investigation, vast landscapes of poverty, drug use and a sense of decline compliment the story.

I think this is one of the closest books to the Jack Reacher novels that David Baldacci has written. Amos in a place he doesn’t’t know, the scenes of decline, weird people around not wanting Police to investigate. There is also a history brought in of the area, why have other people died in the past? Amos is uses his photographic memory, his wit and humour to dig deep and find out who has killed in this town

Is there any Jack Reacher action?

Although Amos is not like Jack Reacher in stature, there is plenty of action and thrills to make even the best Jack Reacher fan happy. The way that Amos thinks will keep you intrigued as his skill set and slightly quirky nature is a brilliant attribute that David Baldacci really utilizes throughout the book.  We also find that Decker and Jamison are in strong danger, the closer they get to finding out who the killer could be.

If you haven’t yet read the Memory Man book, then start here as this will get you in to series of books and you will grow to love Amos Decker. If you do like your mystery books and crime thrillers then I really think you will like this book.

If you like books like Jack Reacher then get this book as you will absolutely love it. Again be ready for the late nights and tired eyes as you will be flipping through the pages wanting to find out if Amos will catch the killer.

US Readers, Jack #Reacher is back!

#TheSentinel by Lee and Andrew Child is out in paperback today >>
http://bit.ly/US_SentinelPBK

Godzilla vs Kong was awesome

With libraries the lifeblood to so many communities around the country, we want to highlight those most-borrowed books in 2020 that helped get us through multiple lockdowns - with the number #1 spot going to @LeeChildReacher 📚

Here is the top 10!🥳
#BestsellerAwards